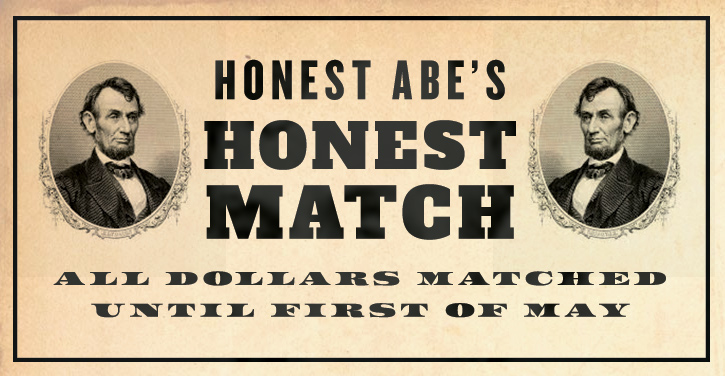 8 score and 6 years ago — on January 2, 1851 — Abraham Lincoln wrote a letter to his ‘lazy’ step-brother, John Daniel Johnston, denying his request for an $80 loan. The letter starts:

"Your request for eighty dollars I do not think it best to comply with now.”

He then goes on to lecture him on his work ethic and offers him an interesting incentive deal instead. You can read the full letter here, but let’s focus on this excerpt:

“…to secure you a fair reward for your labor, I now promise you, that for every dollar you will, between this and the first of May, get for your own labor, either in money or as your own indebtedness, I will then give you one other dollar. By this, if you hire yourself at ten dollars a month, from me you will get ten more, making twenty dollars a month for your work.”

Being a politician, Lincoln probably did his fair share of fundraising and he most likely knew the importance of a crafty message. Initially, I thought this might have been the first ever matching gift offer, but it turns out Ben Franklin is credited for inventing it… along with everything else. The post on ‘Mr. Franklin, Father of Fundraising’ will have to wait. For now, let’s review Abe’s match strategy and see how it holds up to today’s standards:

Not exactly clear and concise, which isn’t the best for direct mail, but we can assume that’s just how English was back then. One thing this offer does have though is the celebrity signature. Sure, Lincoln wasn’t exactly president yet… but he was a successful lawyer and politician. I’m sure his step-brother knew who he was… and how much money he had! A letter from Abe would really stand out amongst the pile — just like a well-known signer on your own appeal letter will stand out to donors today.

Oops, Abe didn’t establish a goal. His step-brother didn’t have a tangible amount to work towards — something you definitely want to provide for your donors during a match. Also, it’s best for a match donor to specify the limitations of their offer so things don’t get out of hand. Perhaps Lincoln should have set the goal as $80 big ones — the original loan amount in question.

May 1st?… May Day??… Could Abe’s proposed cutoff date happen to coincide with the International Worker’s Day??? Unfortunately no, that wasn’t a thing until the 1880s. Too bad. It is fundraising best practice to consider a deadline around a momentous occasion to not only establish urgency, but also so people can easily remember it. Lincoln’s deadline seems arbitrary. Maybe he could have chosen May 10th instead — his dear step-brother’s birthday.

We won’t dock Abe for lack of branding, he probably had more important things to attend to, but branding is key to setting a campaign apart from the rest. With more time, he could’ve given his offer a catchy name like The May Day Match, The Back to Work Challenge, or better yet… Honest Abe’s Honest Match. But honestly, keeping the message simple instead of weighing it down with lots of complicating detail is critical.

Well, I haven’t found a follow up letter from John Daniel Johnston, so I don’t know. Also, he didn’t go on to achieve history worthy accomplishments like Lincoln (16th President of the US, Emancipation Proclamation, appearing on currency, etc.) so it is hard to say if he ever changed his ways or received any matching gift funds. One thing is for sure: Lincoln didn’t invent the matching gift offer, but he certainly did try it. And there’s no harm in trying. 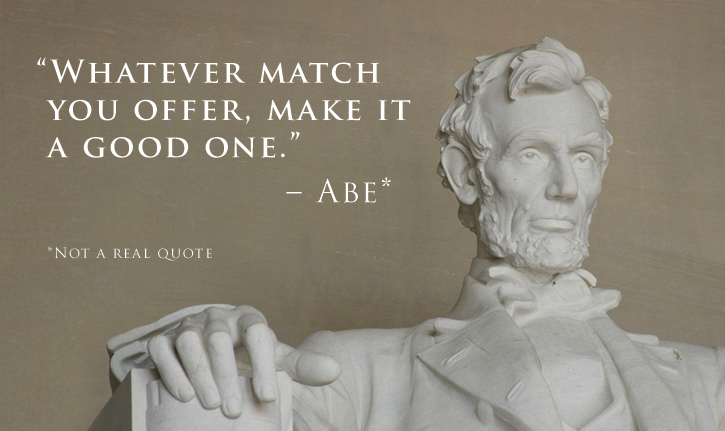 Getting your copywriting “groove” back